Should cosmetic gum surgery be chosen for people with receding gums?

People with receding gums disease not only affect the aesthetics but also can suffer from tooth sensitivity, gingivitis, broken teeth, ... Treatment of receding gums is not simple and takes a lot of time. However, today, when science and technology as well as the aesthetic industry develop strongly, cosmetic gum surgery is also gradually chosen. Let's follow the article below to understand whether to choose the method of cosmetic gum surgery for people with receding gums.
What does receding gum disease affect to your health?
When the gums recede, you will see that the skin covering the root of the tooth will gradually thin, atrophy, exposing the tooth root. Receding gums can occur in anyone, is not affected by age or gender, and is most common in incisors and canines. 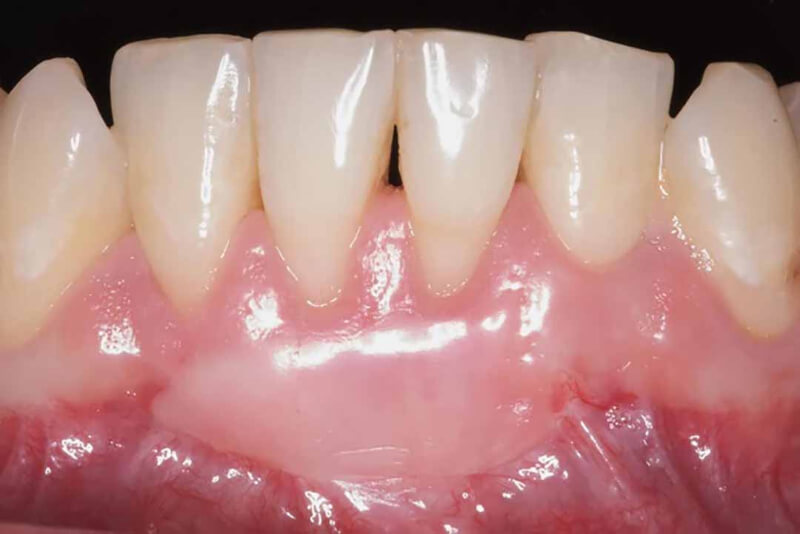 When gum disease is not treated in time, it will make the roots of the teeth longer and darker, affecting the aesthetics. Not stopping there, the roots of the teeth that are not covered by the gums will be sensitive, the enamel will gradually weaken, ... even affecting the nerve roots.
Signs of receding gums
Receding gum disease is divided into two types: receding gums of the upper jaw and receding gums of the lower jaw. In particular, the lower jaw receding is often more difficult to detect than the upper jaw because the lips can cover a lot. Because gum disease is difficult to detect by normal vision, patients do not catch the disease promptly and correctly. When you have the following signs, you need to visit a dental clinic right away:

Should you choose cosmetic gum surgery for people with receding gums?
Plastic surgery for receding gums is being recommended by most dentists because of its excellent post-operative effect. Before performing gum graft surgery, you will be examined to select the appropriate gum tissue to implant into the receding gum.
All procedures are performed by experienced and highly qualified professionals using modern and sterile machinery and equipment. After the implant is complete, the dentist will sew up the wound, cover the gums, and the receding gums with an artificial biofilm. After only about 6 weeks after surgery, the wound has healed and after 1 year, the gum tissue will achieve its original structure.
Thanks to gum graft surgery, the gums are restored to damage, preventing and reconstructing the original gum shape, helping to prevent the gums and teeth from being destroyed. However, with mild cases of receding gums, you will not need surgical intervention, but you may be prescribed antibiotics to eliminate harmful bacteria and prevent their multiplication.
Popular method of gum grafting
Thus, the above information has answered in detail about plastic surgery for people with receding gums. And now there are 3 popular methods of gum grafting, suitable for each patient's condition.
Connective tissue grafts
It is a treatment for patients with a root infection. At this time, the dentist will stop the palatal skin and subepithelial connective tissue to suture the gum tissue around the tooth root that has receded gums.

Free gum grafting
Free gum grafting is often indicated for people with thin gums that need more tissue to expand the gums. Dentists will take tissue of the palate and attach it to the gum area being treated to create a flap and remove the tissue layer below the top layer of flesh.
Stem grafting
This case will be applied by dentists when there is a lot of gum tissue near the tooth. The gingival flap or gingival root will be partially cut to pull down to cover the exposed root and be sewn in place.
Now, you can confirm whether to choose cosmetic gum surgery for people with receding gums. Go to reputable dental facilities to be examined by highly qualified doctors to avoid post-surgery consequences.